Coronavirus: What’s happening in Canada and around the world on Tuesday

“I will be blunt — so far we are not bending the curve back down,” Dr. Deena Hinshaw told reporters Monday.

“The exact restrictions that are needed — that’s where that question lies,” the province’s chief medical officer of health said, noting that her team will be making recommendations to premier and cabinet in the days ahead.

Alberta reported 16 additional deaths on Monday, bringing its COVID-19 death toll to 631. Hospitalizations have been on the rise, and as of Monday there were 609 people hospitalized and 108 were in intensive care — record highs in the province.

Calgary Mayor Naheed Nenshi said that if the province doesn’t move, he’ll call a special meeting of city council to talk about measures for their city.

“We are way beyond the time where we even have 24 hours to spare,” Nenshi said Monday. “Decisions have to be made today, they have to be made tomorrow, and we have to work way harder on flattening this curve.”

In Edmonton, Mayor Don Iveson said his city is looking at what it can do on its own.

“We are on a collision course with calamity,” said Iveson, who also urged the province to do more.

As of 8 a.m. ET on Tuesday, Canada’s COVID-19 case count stood at 423,057, with 71,539 of those cases considered active. A CBC News tally of deaths based on provincial reports, regional health information and CBC’s reporting stood at 12,777.

In British Columbia, COVID-19 restrictions were extended to Jan. 8 as the transmission and community spread of the illness remain high.

Eight employees at a British Columbia mink farm have tested positive for COVID-19 and though health officials don’t know the source of the virus, there is concern after a similar outbreak in Denmark led to hundreds of human cases and the culling of millions of animals. 1:55

That means the holidays will be affected as hosting or visiting people from different households is prohibited with very few exceptions, said Provincial Health Officer Dr. Bonnie Henry.

“We don’t want to be exposing our loved ones to the virus,” she told a news conference.

Saskatchewan health officials reported 274 new cases of COVID-19 and one additional death on Monday, bringing the provincial death toll to 60.

Manitoba reported 325 new cases of COVID-19 on Monday and 12 additional deaths, which pushed the provincial death toll over 400.

Dr. Brent Roussin, the province’s chief public health officer, reiterated his call for people to stay home as much as possible.

“Our case numbers remain too high to sustain — there’s still to much strain on our health-care system,” he said Monday.

In Ontario, health officials reported 1,925 new cases of COVID-19 — a new daily record. The province also reported 26 additional deaths, bringing the provincial death toll to 3,798.  According to provincial data, there were 725 people in hospital with COVID-19, including 213 in intensive care units.

Premier Doug Ford said vulnerable seniors, their caregivers and health-care workers will be among the first to receive the vaccine.

Quebec reported 1,577 new cases of COVID-19 and 22 additional deaths linked to the virus, three of which took place in the last 24 hours. Health Minister Christian Dubé said the province plans to give its first doses of the Pfizer vaccine to about 2,000 people in long-term care homes.

There were no new cases reported in Newfoundland and Labrador. Premier Andrew Furey said on Monday the province would not be rejoining the so-called Atlantic bubble for at least the next month. That means all visitors to the province will be required to self-isolate for 14 days whether they’re from Atlantic Canada or not.

There were no new cases reported on Monday in the Northwest Territories. 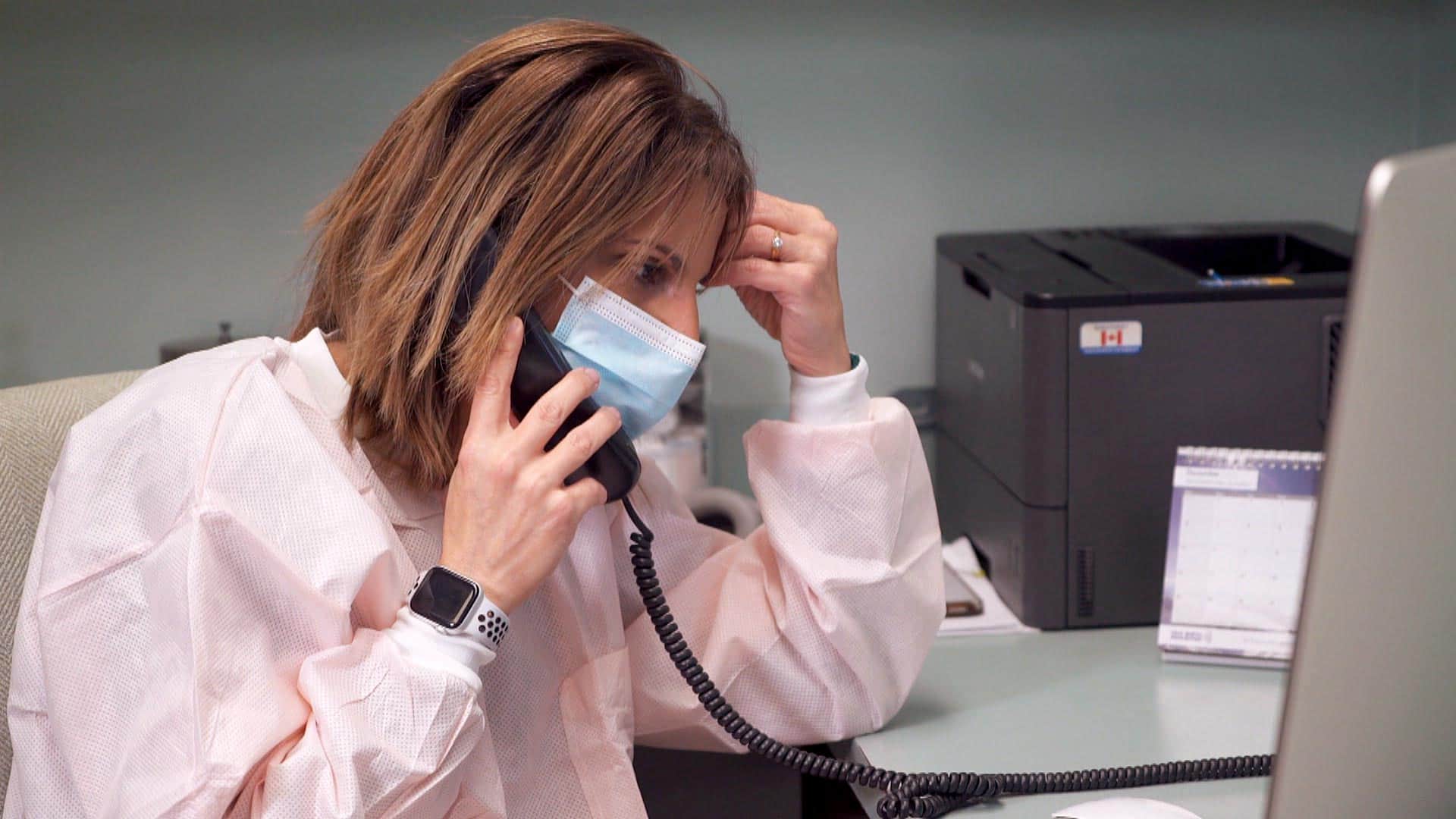 COVID-19 isn’t just putting pressure on emergency rooms and ICUs. Family doctors are faced with diagnosing and treating patients using telemedicine instead of in person. They’re feeling the strain, and that pressure ends up impacting other parts of the health-care system. 1:54

From The Associated Press and Reuters, last updated at 7:45 a.m. ET

As of early Tuesday morning, there were more than 67.7 million cases of COVID-19 reported worldwide, with more than 43.6 million of those considered recovered or resolved, according to a coronavirus tracking tool maintained by Johns Hopkins University. The global death toll stood at more than 1.5 million.

In Europe, British health authorities rolled out the first doses of a widely tested and independently reviewed COVID-19 vaccine Tuesday, starting a global immunization effort that is expected to gain momentum as more serums win approval.

The first shot was given to Margaret Keenan, who turns 91 next week, at University Hospital Coventry, one of several hospitals around the country that are handling the initial phase of the program on what has been dubbed “V-Day.”

The first 800,000 doses are going to people over 80 who are either hospitalized or already have outpatient appointments scheduled, along with nursing home workers. Others will have to wait their turn. 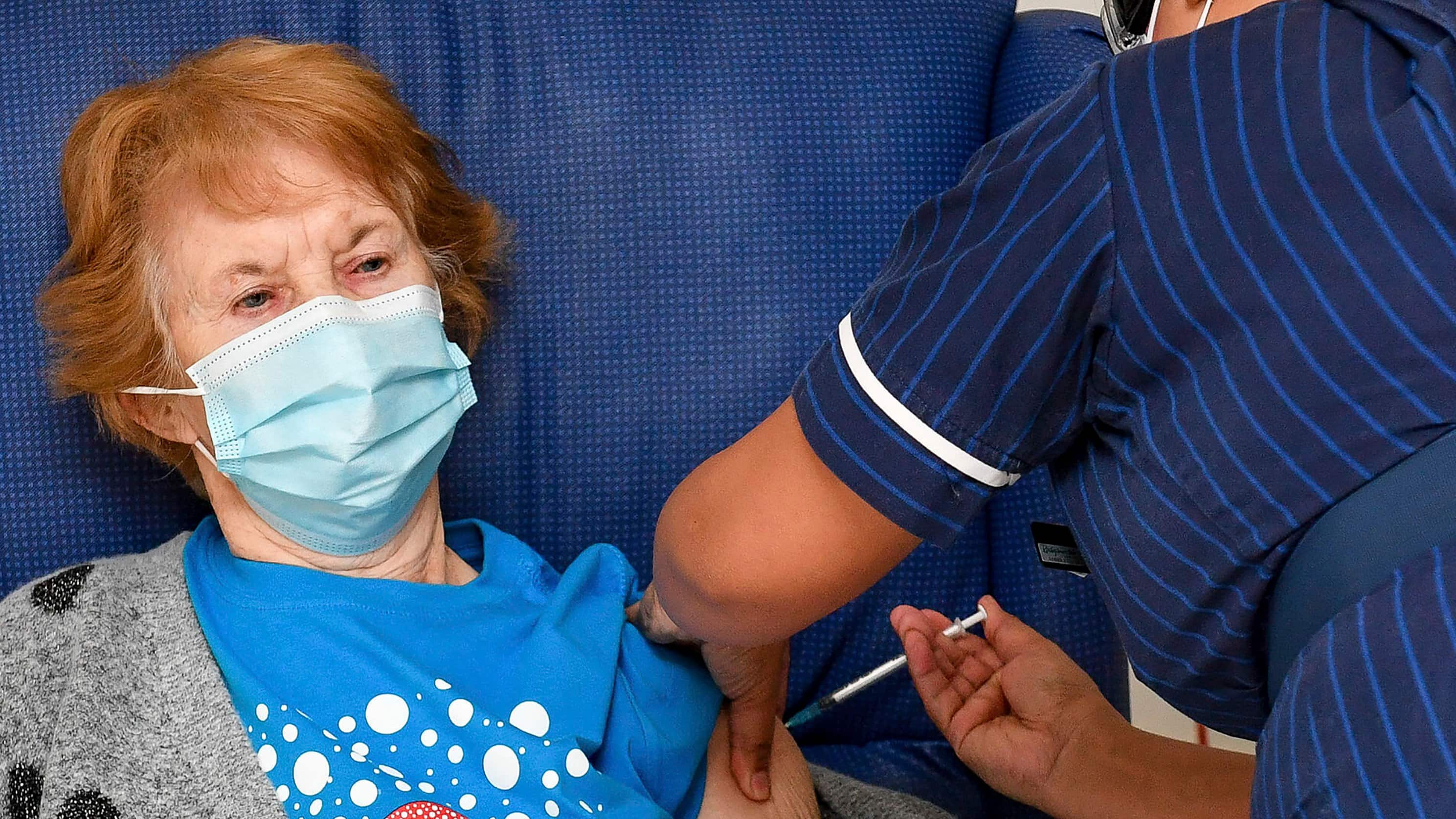 Margaret Keenan has kicked off a global vaccination effort by receiving the first shot of the Pfizer-BioNTech COVID-19 vaccine in Coventry, England. ‘Hopefully it will help other people to come along and do as I did,’ she said.  0:48

France may have to delay unwinding some restrictions next week after signs the downward trend in new cases has flattened out after shops were allowed to reopen late last month.

In the Asia-Pacific region, authorities have ordered mass coronavirus testing and locked down some locations in the southwestern Chinese city of Chengdu following the detection of two new virus cases there.

In the Americas, the U.S. Congress will vote this week on a one-week stopgap funding bill to provide more time for lawmakers to reach a deal on COVID-19 relief and an overarching spending bill to avoid a government shutdown.

Case numbers are on the rise in the U.S., prompting dire warning from some politicians and health officials. Pennsylvania Gov. Tom Wolf warned Monday that the coronavirus is running rampant throughout the state and could soon force overwhelmed hospitals to begin turning away patients.

Wolf called it a “dangerous, disturbing scenario” that will become reality if people don’t take steps to slow the spread. He said additional pandemic restrictions might be on the way but did not elaborate on what his administration might be considering while also acknowledging the ones already in place have not worked.

Wolf said the unchecked spread of the virus in all regions of the state means that resource-sharing agreements among hospitals could soon begin to break down and force them to begin rationing care.

In Brazil, the president said COVID-19 vaccines will be offered for free to all citizens, as his government entered advanced talks to buy 70 million doses from Pfizer.

In the Middle East, Yemen is “on the edge of a precipice” after years of civil war, a senior UN official warned on Monday, with millions of children suffering from malnutrition and facing the risk of famine. Ted Chaiban sounded the alarm about the worsening humanitarian situation as the United Nations Children’s Fund launched an appeal for a record $2.5 billion in emergency funds from global donors.

As UNICEF’s director for the Middle East and North Africa, Chaiban oversees an effort to assist children and families in a region hit hard by conflict, natural disaster and the coronavirus crisis. With some 39 million children in need of assistance, the Middle East alone accounts for 40 per cent of the agency’s $6 billion global appeal.

South Africa remained the hardest hit nation in Africa, with nearly 818,000 reported cases of COVID-19 and more than 22,000 deaths.